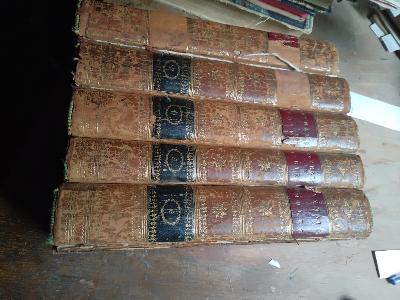 missing Vol. 4! Vol.1: (10), 536 pages, one folded map of the World (35 x51 cm), one folded map of Europe (44 x 44 cm, one folded map of the European Settlement in East India (36 x36 cm) / Vol.2: one Porträt of Raynal and folded map of Settlements in Mexico and New Spain and West India (35 x 51 cm)(6), 564 pages / Vol.3: (8), 572 pages and one folded map of settlements in South America (37 x 46 cm.) / Vol.5: (6), 469 pages / Vol.6: (4), 573 pages plus 84 pages and one folded map of settlements on North America (42 x 53 cm) Indexemplar, some book covers are lose, leather scratched, Exlibris John Selwine,
Map of the United States in North America: with the British, French and Spanish Dominions Adjoining, According to the Treaty of 1783 (19.9 x 16"). This is one of the earliest English-produced maps to officially acknowledge the United States. It depicts the new nation with its western border on the Mississippi River. The states of Georgia, South Carolina, North Carolina, and Virginia stretch from the Atlantic to the Mississippi. The map is filled with information on early settlements, forts, Indian villages and fishing banks. The title is enclosed in a simple cartouche, with the island of Bermuda below. The map is dated May 1st, 1783. Reference: McCorkle #783-11.

Map of the World with the New Discoveries on Mercator's Projection (19.8 x 13.3"). This map presents an interesting view of the world in 1783 with emphasis on British interests and discoveries. The Eastern U.S. is still labeled British Colonies. The remainder of North America lacks boundaries, although the areas of New Albion, New Mexico, Louisiana, and Canada are named. San Francisco Bay is named Port Sir Francis Drake. The islands of the Pacific Ocean receive special attention, highlighting the discoveries of Capt. Cook, with O-Why-Hee featured within the Sandwich Islands. Australia (New Holland) is almost fully delineated, except Tasmania (Van Diemens Land) is shown attached to the mainland. Asiatic Russian is made up of the Government of Siberia and the Government of Irkutsk. Cook’s Str. separates Asia and North Ameriungefähr
Dieses Buch ist leider nicht mehr verfügbar.
Versand: